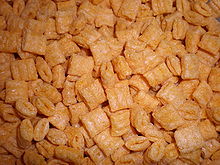 Things are going to be a little less sweet in the mornings… The cries for better nutrition and less sugary breakfast cereals could possibly send Captain Crunch into retirement soon. The good ole’ sugary sweetness that has kick started so many kids, myself included, has fallen from no.1 to obscurity. Shamed for having being too sugary and therefore the cause of every obese kid or adult out there.  In the 12 gram of sugar category, you have in the line up famous tasty morning treats such as Kellogg’s Frosted Flakes and Froot Loops. General Mills is a little sweeter in this category with their menu of Trix, Cookie Crisps and Lucky Charms. Yeah, they’re magically delicious – 13grams of yummy sugar goodness.  One of my absolute favorite Kellogg’s Apple Jacks weighs in at 15g of sugar!  Explains why switching to Cheerios at 1g of sugar made them taste like cardboard circles at first. In the 15g group Apple Jacks sits next to Corn Pops and Smacks, all of which are Kellogg’s products. Smacks, btw, used to be called Sugar Smacks, but this obviously is no longer politically correct so they simply tossed the word sugar but didn’t bother to lower the sugar content.  Smacks sounds stupid to me. I’m sorry, I’m old school – give me my Sugar Smacks and Saturday Morning Cartoons!!

But if you take a very close look at the various ready-to-eat cereals, you’ll notice something very disturbing – many so called newer ‘healthy’ cereals out there and that is they have shit load of sugar in them!  Again, I’m not talking about the old school guys like Quaker Oats Cheerios (1g), Kellogg’s Corn Chex (3g), or General Mills’ Wheaties (4g). I’m referring to Muesli, dried fruit & nuts which has a whopping 26g of sugar! Wheaties Raisin Bran has 18g! Frosted Cheerios 13g – see it takes at least 12 grams of sugar to make those little round things taste good!

I am an artist, photographer and avid gardener. I am passionate about life, my family, my dogs and my friends. View all posts by xine133